Tony Toste's distinct voice alone can suffice for a variety of characters on both ends of the story spectrum. He also has the ability to manipulate his voice, accent and mannerisms to suit your project characters needs. He truly is "chameleon-like", the late Ralph Peduto; Mr. Toste's esteemed coach. Below are mp3 samples of his voice.

Tony Toste and his team are excited to announce that Tony will officially be joining the cast of the upcoming Feature Film, 'Brothers James: Retribution' as the role of 'Samuel Thomas'. Find more information about the film at http://www.imdb.com/title/tt4460424/

Tony Toste and his management are humbled to announce that Tonya Hensley, CEO of TDH Talent, will be representing Mr. Toste as his TV/FILM Agent in Atlanta, GA and the SouthEast United States. Tony is very humbled to be apart of such a highly esteemed roster of actors at TDH Talent.

Tony Toste and his management are excited and grateful to announce that Tony has Officially signed a 'Letter of Intent', to play the supporting role in the upcoming Feature Film, 'Devil's Dandruff' . Mr. Toste wanted to thank Mr. Jason Cook for this phenomenal opportunity. It is filming in London/United Kingdom. 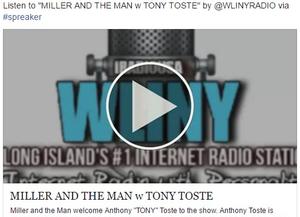 Tony Toste and his team are humbled to announce that Michelle Martinez & Frank Powers of SHH Talent, will be representing Mr. Toste as his TV/FILM Agent in Las Cruces, NM and the SouthWest United States. Tony is grateful to be apart of SHH Talent.

Actor Tony Toste signs with both Mr. Carlos Samudio, as his Executive Manager with Looknow Talent and also Luko Agency of Paris, France; Who will be representing Mr. Toste on an international basis for booking conventions for 2017. Mr. Toste is grateful to have Mr. Samudio managing all aspects of his career going forth.

Actor Tony Toste was invited onto KLINY New York's/Long Islands #1 Radio Station 'Miller and the Man.' Tony had an enjoyable and fun organic interview with the guys and was welcomed back with an "open mic", anytime Tony wants to call in; "truly humbling", from Mr. Toste. Catch the Radio Show by Clicking Here

Actor Tony Toste wrapped up his work on Season 8 of the award winning TV show, 'I Almost Got Away With It' . He played the main/lead protagonist (the good guy) in the premiere episode as 'Detective Daniel Mederos'. He also worked on the second episode as was cast as and played Police Officer #1.